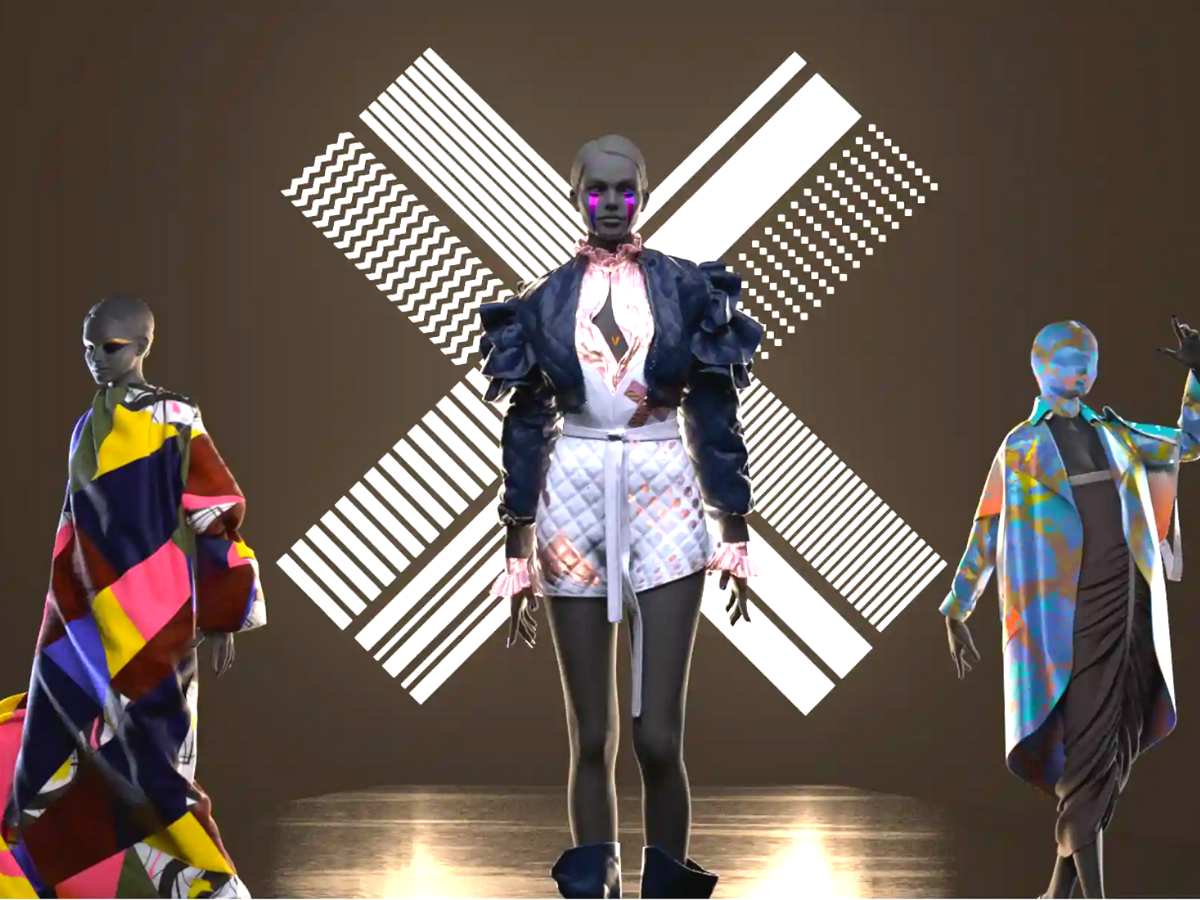 The fashion industry – particularly fast fashion – has thus far produced immense damage to the environment. Fast fashion’s annual carbon emissions surpass that of international flights and maritime shipping combined, and a 50% increase in greenhouse gas emissions is expected by the end of the decade if mass textile production continues at the same rate as it does now.

One of the proposed measures to tackle this is virtual fashion. Making physical waste material obsolete, this revolutionary idea was born from the fact that many individuals buy clothing and accessories purely for social media content. Digital pieces as an alternative still allow buyers to show off their new wardrobes but in a more responsible manner.

This also means that out-of-the-ordinary, gravity-defying garments can be made accessible to many at a fraction of the price. Companies DressX, XR Couture, and The Fabricant have become the main competitors in the industry.

NFTs particularly are digital objects, often residing in a separate ecosystem limiting interaction and are embedded in code and serve the purpose of becoming an asset. Virtual couture pieces could become interactive for investors, adding relevance and fun to the standard non-fungible token.

These projects are at the forefront of a sea change in the fashion industry, transforming how consumers interact with couture.

What is virtual fashion?

Virtual fashion houses allow consumers to don their clothing and accessories in the digital sphere through photographs and videos. Hoping to reduce waste whilst simultaneously allowing users to become trendsetters, these companies collaborate with graphics artists to create unique pieces.

‘We strive to revolutionize the contemporary fashion realm by leveraging technology. We collaborate with a filtered pool of multidisciplinary Digital fashion designers and Artists where we create a paradigm that provides an opportunity for the New-Gen to satiate their creative quest and, at the same time align with the sustainability values.’

‘We strongly believe that the amount of clothing produced today is way greater than humanity needs. We share the beauty and excitement that physical fashion creates, but we believe that there are ways to produce less, to produce more sustainably, and not to produce at all.’

Though the outcome may be different, virtual fashion websites operate very similarly to existing consumer fashion sites. Customers are able to browse through their collections, which include 3D designs of shirts, trousers, dresses, accessories, and shoes. These styles are often unique and futuristic, utilising the digital medium to create pieces that would be difficult or even impossible to create in real life.

When an item is picked, the customer must upload a picture of themselves to the website. After checking out and paying, in several days, the customer will receive their picture back, with an edit of the garment over their original outfit.

Although it is essentially Photoshopping, these designs are only available on the website, and available in limited quantities – maintaining the allure of exclusivity that exists in designer fashion. Not only does this eliminate waste from the production and disposal of mass-produced clothing, but it also gets rid of the carbon emissions from shipping.

Many of these designers are independent, renowned digital artists, and are new on the fashion scene. However, traditional fashion houses have taken a gander at incorporating technology into their collections as well.

In an unexpected project, Gucci collaborated with the prestigious auction house Christie’s to create and sell their NFT, entitled ‘Aria’, a fashion video which sold for £18,316.

Additionally, Dolce & Gabbana recently released a nine-piece collection of NFTs, which sold for a total of over £1.4 million. ‘Collezione Genesi’ was created in collaboration with UNXD, a digital luxury marketplace, and featured digitally rendered dresses, suits, jackets, and crowns.

Though interesting, these collaborations aren’t exactly interactive, as fashion often is. This is why fashion houses have also taken to games to sell their tech-infused collections.

Games that feature the use of avatars often require users to pay for skins or digital clothes for their online counterparts to wear. This is a regular feature of many games, as users often feel like their avatars are a reflection of who they are or who they want to be.

However, this has recently become more relevant as high fashion brands have partnered with games to produce exclusive digital clothes and accessories. In a flurry of projects, Marc Jacobs and Valentino collaborated with Animal Crossing to launch a digital collection, Louis Vuitton partnered with League of Legends to create exclusive skins, The North Face x Gucci released Pokemon Go accessories, and lastly, Prada skins are available on Final Fantasy XIII. A digital Gucci Dionysus bag also sold for £3,018 on Roblox, costing more than its physical counterpart.

Games have also been created solely to house collections, such as Balenciaga’s ‘Afterworld’.

Fashion-house-produced non-fungible tokens have also been sold in games. Burberry has sold NFTs in Blankos Block Party, in the form of a shark avatar called ‘Sharky B’, and an array of accessories that can be placed onto any of the other ‘Blanko’ avatars. Released in commemoration of their 200th anniversary, Louis Vuitton’s ‘Louis: The Game’ also has 30 collectable NFTs embedded into it.

In a rogue take on virtual fashion, Gucci has also sold their designer sneakers virtually for £6.60 – £8.80 on an augmented reality app called ‘Wanna’. This means that users can ‘wear’ their 3D shoes digitally and in real-time via their smartphone cameras.

Why is this relevant?

As digital platforms become the new public, individuals are more empowered to share their personas online as a form of self-expression – they are no longer presenting themselves to their local communities, but the world. Clothing has become one of the main vessels for this.

The fashion trend cycle has accelerated greatly, as influencer culture and aspirational figures have set the scene for how the ‘in’ crowd should dress. This is why these cycles have been segmented into ‘micro-trends’ – wherein articles of clothing or styles are heavily endorsed and exposed online for a short period of time, and go out of fashion as fast as they come into it. At this point, the original pieces of clothing have been replicated and manufactured by multiple fast fashion companies, and many are not willing to purchase the pieces anymore, whilst those who have them are quick to throw them away.

Fashion has become a way to stand out from the crowd – to top others like them, and gain recognition for it. When too many people adopt these trends, the significance of these pieces is reduced greatly; the value of garments has become more ephemeral than ever.

It is not unusual for individuals to buy clothing for the sole purpose of displaying it in social media pictures and videos. Shifting from traditional celebrity culture, when access to these glamorized individuals was less frequent and curated, influencer culture is conceived from the average individual, who has unexpectedly become a trendsetter. With the large volume of people aspiring to become influencers, clothing has become a greater indicator of ‘coolness’ and social standing more than ever.

In-game fashion is also an exciting new medium, as luxury fashion has signified class and wealth in the past, their digital pieces become accessible to many. This allows individuals to express themselves in a way they wouldn’t be able to in real life, living vicariously through their avatars.

Lessening the environmental burden through non-physical consumerism, it seems that both producers and consumers benefit from this new paradigm.

Playfulness and imagination are traits shared by both fashion and the digital sphere, which is exactly why the two merge so well. The metaverse has slowly become a more legitimate forefront for couture, with its boundless potential for creativity. Technology has allowed not only individuals to express their fashion senses, but for designers to showcase otherworldly pieces and ideas. It is hoped that these pioneers will lead us towards a more sustainable future.