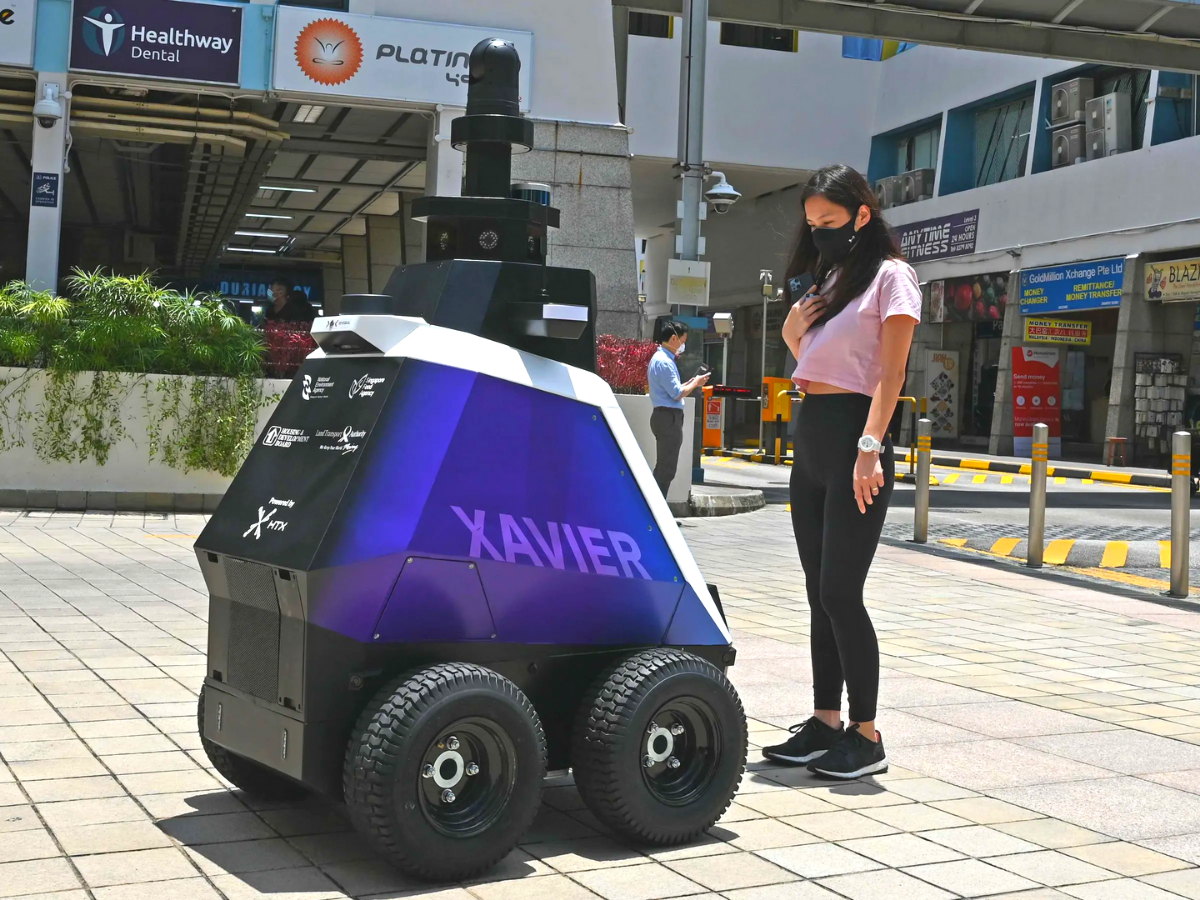 Robots are being trialled to police ‘undesirable behaviour’ in Singapore, stoking fears of a surveillance state.

Singapore has been called an advanced surveillance state in the past, with government-controlled internet service providers (ISPs) allowing unrestricted state access to citizen data, and 90,000 police CCTV cameras with facial recognition capabilities, which is set to grow by 200,000 by 2030. This has been made more visible with the unveiling of trial policing robots.

Xavier robots are newly-developed patrol machines that stop ‘undesirable behaviour’ by blaring warnings out through their speakers. The bot autonomously weaves through crowds, keeping an eye out for infractions. The bot recently went through a three-week public trial in September, deployed at a popular shopping centre and a housing estate.

This is not the first iteration of policing robots in Singapore, MATAR was unveiled last two years ago to accompany police patrolling parades, and more recently, enforce Covid-19 distancing laws.

‘HTX’s ground robots are highly versatile and can be customised for broad and widespread application in different fields and operational environments. With Xavier, we are able to force multiply agencies beyond the Home Team by augmenting their workforce needs and achieve greater operational efficiency on a single robotic platform. This synergy enables government agencies to build a strong ops-tech ecosystem and continue enhancing public health and safety.’

How does Xavier work?

Xavier’s vision is made up of IR, LED illumination, and low light 360-degree cameras, which are able to take images and videos in dim light and the dark. Data from these cameras is streamed to a video analytics system that utilises deep convolutional neural networks and software logics to detect unsatisfactory behaviour.

It is also programmed with an interactive dashboard that summarises battery health and communications power, allowing officers to keep track of and control multiple robots at a time, also enabling them to respond to incidents remotely through a two-way intercom and pre-recorded voice messages.

The rogue behaviours that Xavier robots monitor include: smoking in prohibited areas, illegal hawking, improperly parked bicycles, a congregation of more than five people (due to Covid-19 restrictions), as well as the presence of motorised active mobility devices and motorcycles on footpaths.

When any of these are detected, real-time alerts are triggered and sent to the command and control centre, at which point the respective warning will be displayed to discourage citizens from continuing this behaviour.

‘The deployment of ground robots will help to augment our surveillance and enforcement resources. For instance, the surveillance of illegal hawkers can be manpower intensive as officers need to be deployed at various areas across the island. The adoption of robotics technology can be used to enhance such operations, and reduce the need for our officers to do physical patrols.’

Xavier is aimed at keeping order and increasing safety measures for its citizens.

‘Xavier can potentially augment our enforcement presence and deter errant active mobility behavior on footpaths. It could also provide intelligence on new hotspots or areas where egregious active mobility users have been spotted to help focus our physical enforcement efforts.’

Aimed at saving costs, and support a shrinking, ageing workforce, the robot was developed to carry the burden of foot patrol officers, whilst increasing efficiency. Repetitive, time-consuming, and minimal tasks done by valuable and costly human officers will be accomplished by Xavier robots. Additionally, as the control centre allows workers to control multiple bots at once, there is a far greater reach.

Singapore and the surveillance state

There have been many complaints against Singapore and its lack of privacy laws in place. Even though it is a universal human right, there is no right to privacy covered in the Singapore Constitution. As the facial recognition CCTV and rollout of Xavier show, surveillance methods are presented as a fait accompli, and Singaporeans are by default expected to accept the introductions of these technologies as a necessary improvement.

It seems that in Singapore, security is prioritised greatly over privacy – policing has pervaded much of the Singaporean public’s activities. Earlier in the year, the government announced that Covid Track and Trace data could be accessed by law enforcement, contrary to past promises. This was only amended after widespread disapproval. Protests in Singapore are also illegal without a police permit, with organisers facing thousands of dollars in fines.

A lack of protest to many of these policies suggests that citizens do not mind being surveilled, or may be too hesitant to speak out against it.

Increased methods of monitoring and policing can create a Benthamian panopticon effect – wherein citizens feel as if they are always being watched and will behave accordingly, leading to a disciplinary, well-behaved society. Xavier will only increase this.

Though assuredly, for the time being, the robot will be used as a mere tool for reminding the public of laws, and will not be able to fine or imprison violators.

‘I’d like to highlight that Xavier has no enforcement authority, it augments public officers’ (not to be confused with the Police) operations in enhancing public health and safety by displaying messages to educate the public and deter such behaviours.’