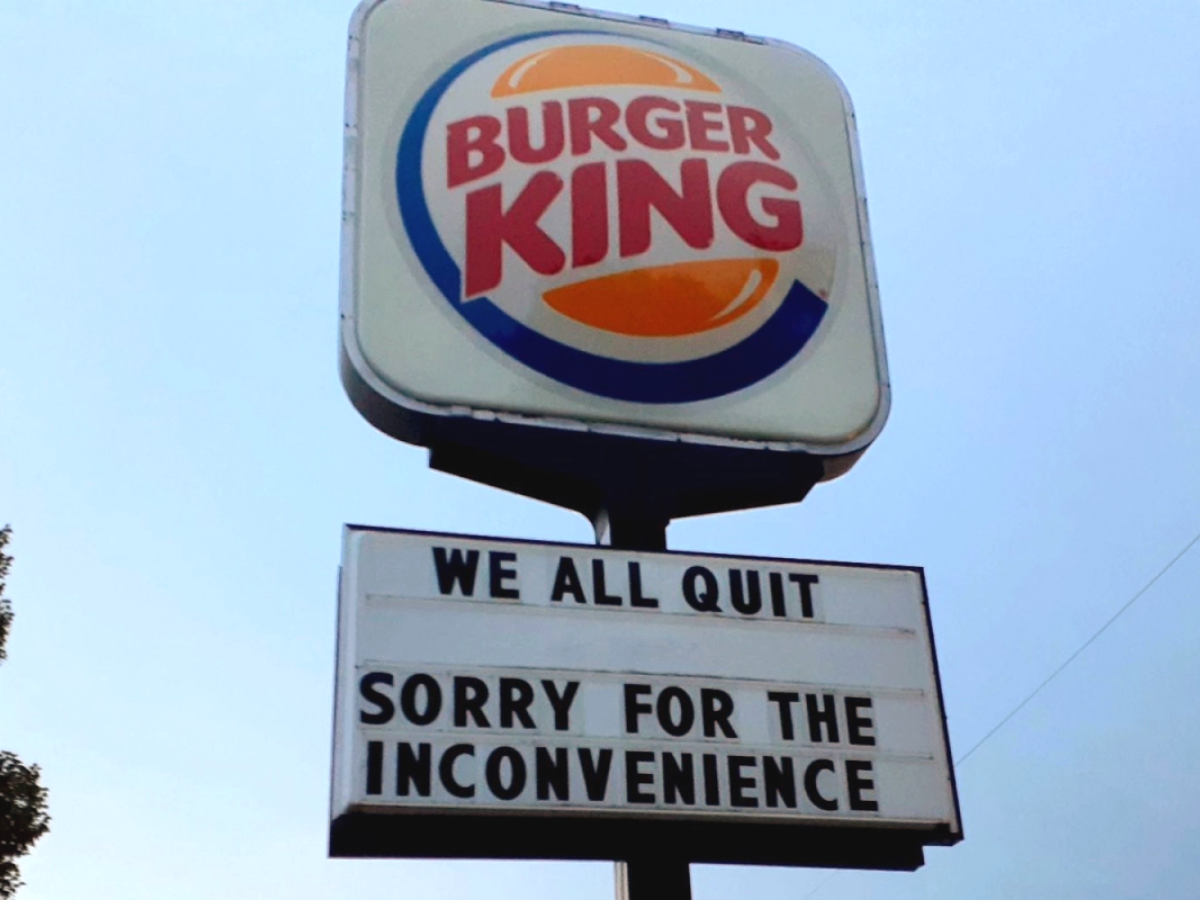 A Record 4.3 Million Americans Quit Their Jobs in August

The pandemic’s effects are rippling through the US labour market as millions quit their jobs.

An eye-wateringly high total of 4.3million Americans quit their jobs in August. Bar, restaurant and retail staff made up a large proportion of this figure that marks the highest number of quits since December 2000. On top of this, 534,000 workers left healthcare and social assistance.

A survey conducted in August found that only 7% of Americans were in their dream careers, and 19% of respondents admitted they were unhappy in their current role. Clearly, a change was needed by many.

Why are people quitting?

Historically, people have quit jobs because they feel confident that they will be able to find work elsewhere, but the pandemic has shaken up labour dynamics around the world. Workers have left their jobs for many personal reasons including health concerns, childcare issues, and a realignment of personal priorities.

The pandemic has given people an opportunity to reflect on what’s important to them, and time away from work has given them the chance to reevaluate their career paths. Often, when we are working solidly, we lack the time and energy to reflect on where we are spending said time and energy. Working 40+ hours a week leaves little time for retraining, upskilling, applying for alternate jobs or building up a ‘side hustle’; time in lockdown gave many the opportunity to finally pursue a change in career.

Although the federal pandemic unemployment compensation program offered less compensation than the furlough scheme here in the UK, it gave those who were living paycheck to paycheck a moment to consider where they’d like their next paycheck to come from. For bar and restaurant staff who were unable to work – and had to work in close quarters with the public when their workplaces were open – the job very quickly stopped being worth the pay.

The federal minimum cash wage for tipped staff in the US is $2.13 with a basic combined cash & tip minimum wage rate of $7.25, which currently equates to £5.32. This is higher in many states, but the fact remains that food service workers are paid incredibly low wages in the US. In light of this, it is hardly surprising that workers are quitting in droves.

Perhaps the question we should be asking is not why they’re quitting, but why they should want to stay.

Given the immense amount of strain healthcare workers have been under during the pandemic, it is hardly surprising that some have decided to hang up their stethoscopes and scrubs for good. The Delta Variant still rages on in the US, and though their vaccination programme is performing well there will be a huge strain on the healthcare system in the months – and likely years – ahead. Staff are already burnt out and many are not mentally, emotionally, or physically prepared to carry on working under current pressures.

As more workers quit, they find they have more leverage over employers. In the wake of what many are calling ‘The Great Resignation,’ employers are having to increase wages and offer better benefits to retain and attract staff.

Some workers have been able to negotiate better pay and perks with employers, such as retaining the ability to work from home or having more flexible hours – both things that employers were very reluctant to agree to pre-covid. This is, in turn, encouraging more people to leave lower-paid jobs. For once, the changes in hiring and employment practices are tipping in the favour of employees.

Lack of experience in your target career has historically presented huge barriers, and for many industries it still does. Perhaps if posts remain unfilled, employers may become more lenient with the amount of experience they expect – especially for supposedly ‘entry level’ jobs.

Interestingly, The Bureau of Labor Statistics notes that ‘there were 6 million fewer resignations in 2020 than in 2019, so there was already a natural backlog of people who would have resigned under normal circumstances.’ People put off leaving their jobs due to the uncertainty around the pandemic and then, once furlough periods ended, finally took the leap.

‘Nobody wants to work anymore’

The phrase ‘nobody wants to work anymore’ became quickly familiar as it appeared on signs in restaurants and fast food joints across the US. The implication is that these staffing issues exist because people can simply no longer be bothered to come to work. This idea seems to be incredibly pervasive and has cropped up in hundreds of places, but it overlooks the wider change in the labour market: people do want to work, they just want to work jobs they care about, and work for employers that care about them.

In fact, figures from the monthly Job Openings and Labor Turnover Summary report show that there are more jobs out there than there are workers available to fill them. So, even if all of those people were to take jobs they didn’t want, there would still be unfilled jobs available. Job seekers are in a position to be picky, and employers will need to step up their game in order to attract the staff they require.

The pandemic gave people the time and mental energy to examine their work life and assess whether it was actually working for them. For many, their calculations revealed that they were simply not getting out what they were putting in. The pandemic has put life in perspective for a lot of people; it has proven life is short and that it is impossible to predict what the future may hold. With so many job openings available, people have felt the risk of leaving their old job might just be worth it.