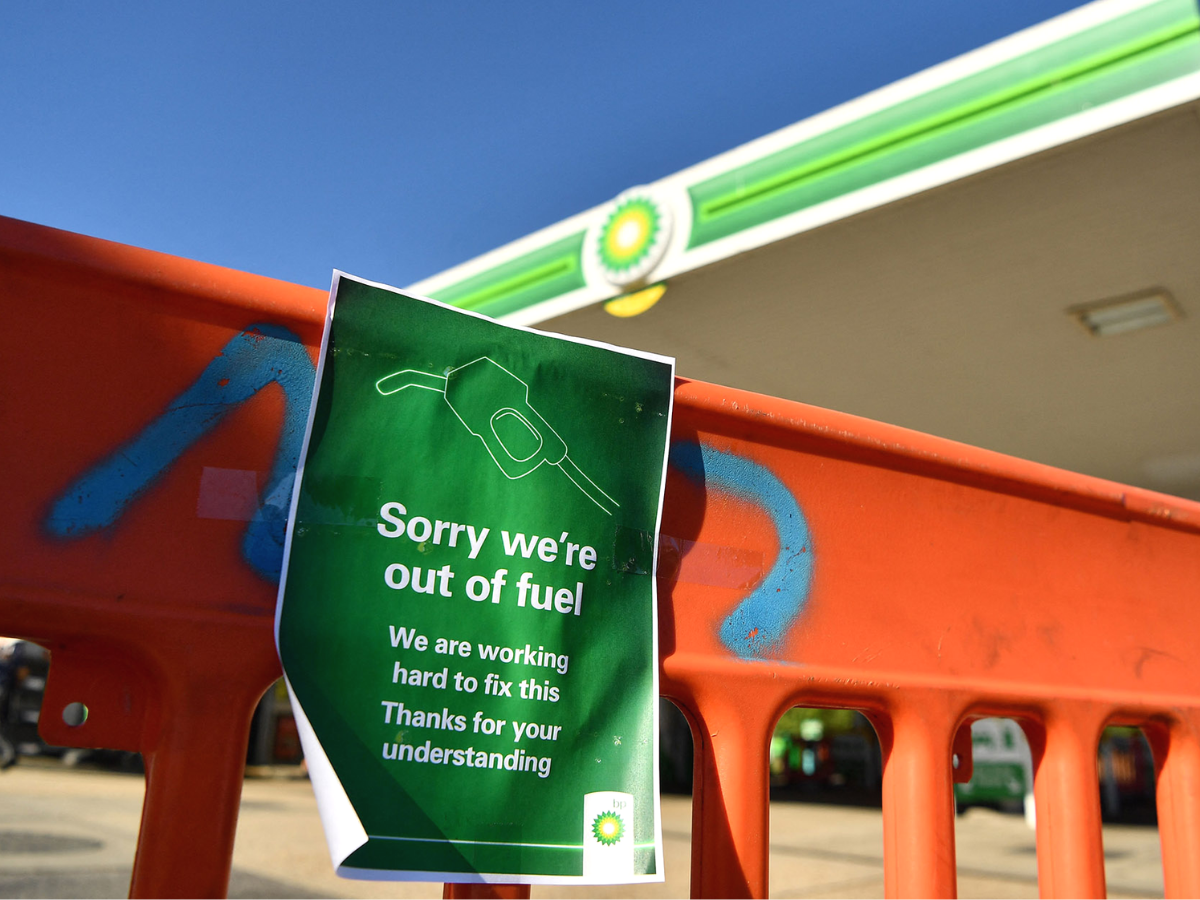 Panicked drivers flock to petrol stations in fear of fuel shortages, but they may be driving the supply chain crisis themselves. What came first, the headlines or the crisis?

Boris Johnson is considering using the military to supply petrol stations amidst serious fuel shortages. Questions linger about whether this crisis was avoidable, and whether it would have ever happened in the first place were it not for dramatic headlines rapidly spreading social media panic.

Some filling stations have implemented £30 caps on how much fuel individuals can purchase in order to ensure no one is left without fuel. It seems the community spirit of the pandemic’s early days may be flagging, but it is key that shoppers think of others as individual stockpiling compounds the problems facing the UK’s supply chains.

News outlets speculating that there would be a crisis drove panic buying, which went on to the very crisis they warned about. People saw fuel was running out and rushed to fill up their cars – or even stockpile tens of jerry cans – creating hour-long queues at filling stations and even blocking roads, limiting access for emergency services. Lincolnshire police ‘respectfully ask[ed] motorists to be sensible when making judgments about joining a queue at a petrol station’ and Bedfordshire police advised motorists to ‘make sure that you are not blocking roads while queuing’ to enable emergency access.

As Tweets from police forces garnered progressively more attention and panicked headlines proliferated, the panic buying cycle repeated and the situation worsened. Now, thanks to panicked consumers, a fuel crisis is in full swing. It is not, however, entirely the consumers’ fault. Full page inflammatory headlines such as ‘we’re running on empty’ have not helped matters; these headlines become self-fulfilling prophecies and drive up the anxiety of readers, exacerbating the very crisis they warn about.

A similar pattern was present in early lockdowns when supermarkets ran out of food. A large part of the issue was panic buying – if people had continued to shop at normal rates and quantities, the situation would likely never have grown as bad as it did. However, it’s difficult to dissuade shoppers once the cycle is in full swing.

Some outlets are already reporting that food shortages may occur again around Christmas if people begin panic buying. Chances are, these headlines are already causing people to plan ahead, starting the stockpiling cycle once again. Periods of stockpiling and panic buying also have a large impact on those with lower incomes – if you can only afford to buy food for the next couple of days, you will be the one to suffer most when shelves are empty.

Why do we panic buy?

Consumers are not necessarily at fault for their stockpiling habits. In fact, the motivation for buying so much food may lay a little deeper. According to Kate Nightingale, a consumer psychologist, panic buying is driven by loss aversion or the phenomenon known as FOMO (fear of missing out). ‘It’s the idea that you can lose something you don’t actually have,’ she told The Independent. ‘The potential of pain or loss is sometimes too great to not act upon.’ Nightingale says the urge to panic buy is heightened when we are emotional, tired, stressed, or sleep-deprived – unfortunately all states we have experienced at least once amidst the pandemic.

Combined with the need to regain some semblance of control over life after the past 18 months, this created the perfect storm for panic buying. The fear of scarcity is self fulfilling. We have now moved from over-buying pasta to stockpiling fuel.

Panicky behaviour is contagious. Photos of empty shelves make us worry there will be none left for us, if those around us panic we begin to worry too. This would have been handy when we were collectively running from predators, but shared anxiety is simply impractical now.

Panic buying is not unique to the covid-19 pandemic – it happened during the Spanish flu pandemic of 1918, and the 1968 flu pandemic – but the speed at which the anxiety spreads is massively accelerated through social media. During periods of panic buying food, a large number of people who were stockpiling felt guilty for doing so, which continued to heighten their anxiety and created a vicious cycle.

Although distribution of food is a bit unpredictable at the moment owing to HGV driver shortages, there is still plenty to go around. Luckily, panic buying food seems to remain minimal now, but all it would take is a few empty shelf photos to do the rounds on social media or a few inflammatory headlines for the issue to flare up again.