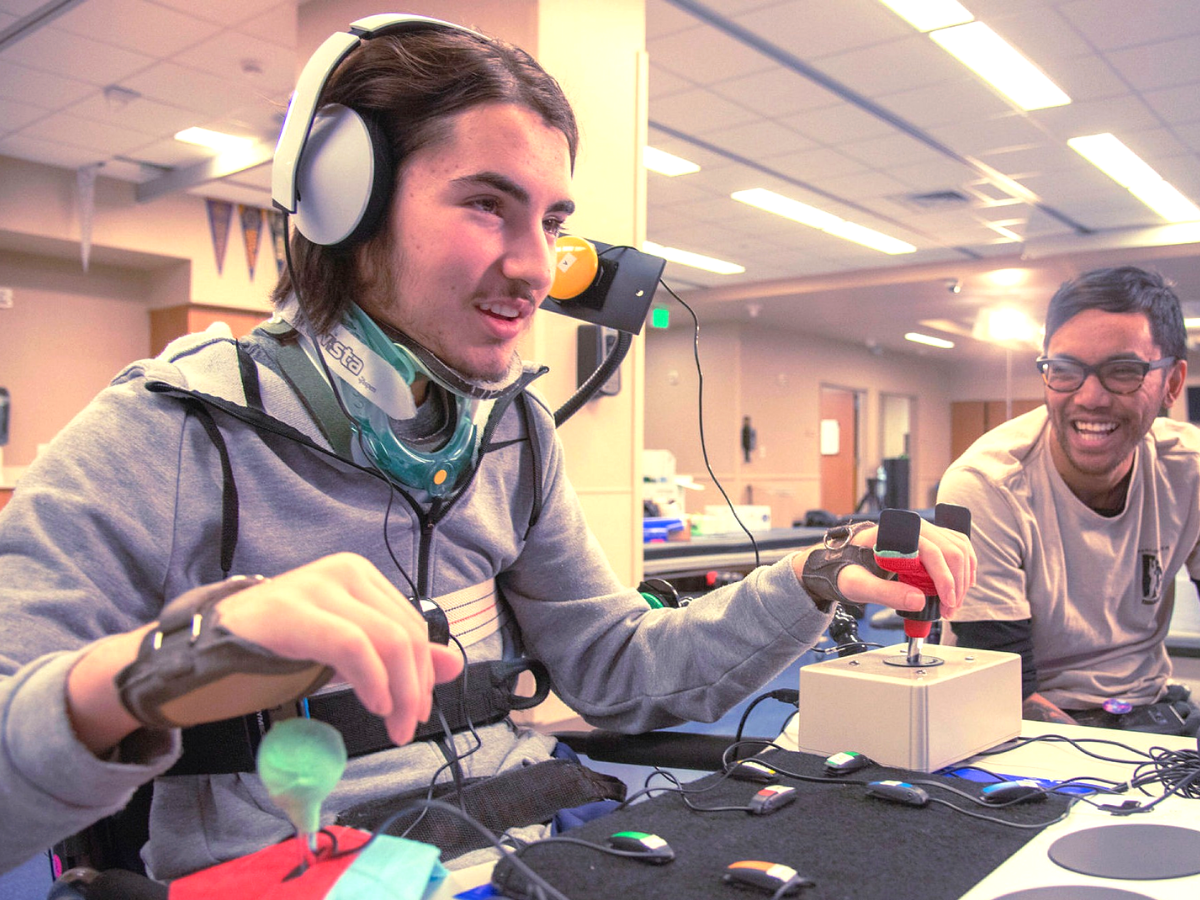 The journey to making video games accessible for everyone.

Gaming is a brilliant way to socialise and stay connected, as well as allowing us to explore worlds other than our own.

Almost everyone engages with games these days whether that’s through console gaming, mobile gaming, or watching others play on YouTube or Twitch. With the Esports industry estimated to break $1billion this year, the impact of gaming is becoming impossible to ignore.

But what if you can’t engage in the gaming world as much as you’d like?

In the US, the gaming industry is currently worth over $65 Billion and during the pandemic a lot of people turned to games as a way to stay connected with people they were unable to see in real life. The social aspect of interacting with other players has been highlighted as one of the most important aspects of gaming in 2021. Ensuring equal access to these communities for gamers with disabilities is a vital step for the gaming industry: ‘according to the ESA Foundation, there are nearly 46 million gamers with disabilities in the U.S. alone’, yet many games are not inherently accessible. Some gamers can’t access this community that many of us – especially young people – take for granted.

As online gaming communities grow and developers become more aware of accessibility issues, this has begun to change: charities like AbleGamers are building custom setups so that no one is left out of the fun.

Xbox has been leading the way with console accessibility, regularly updating their guidance based on community feedback. The Xbox team realises that:

‘If everyone is gaming, then gaming needs to be for everyone. We need to make sure we aren’t unintentionally putting up barriers for those who want to join in. That requires intentional, inclusive practices and thinking in everything thing we do and every product we make. We have to ensure accessibility is a focus from the very beginning.’

From remapping buttons to fully customisable controllers, the physical ways we engage with games are adjustable to suit the needs of players.

Though console controllers are designed to be comfortable and usable for most people, one size and shape does certainly not fit all. The Xbox Adaptive Controller is a hub that works with a range of external devices such as switches, buttons, mounts and joysticks to create a fully customised controller.

Steven Spohn, COO of Able Gamers, worked with Microsoft to develop this technology. He has a modified hat controller that uses infrared sensors to track his movements and move his character. This controller has given him the freedom to build a community and raise awareness of the needs of gamers with disabilities.

As they pivot ‘from chip-making to more consumer-facing technology’, Intel has conducted studies directly with gamers to help make custom products. Their findings highlighted the fact that even though people may share a diagnosis their needs will be different, and therefore the solutions must be adaptable.

For those who can’t use physical controllers, eye gaze technology can be used. EyeMine, a custom Minecraft mod developed by charity SpecialEffect, can easily be added to the game:

‘Windows-based EyeMine is free to download for anyone with a Minecraft account and works with a number of suitable eye-trackers. It can be made compatible with any eye tracker that can control a mouse pointer.’

Being able to engage with the games your peers are playing is life-changing, creating a fun way to socialise remotely as well as giving gamers more independence.

Accessibility extends beyond the hardware. In SuperGiant Games, award-winning title Hades, you become harder to kill every time you die. This makes the game massively more accessible to anyone struggling with the difficulty for any reason, without penalising players.

Even the exercise game Ring Fit Adventure is making steps towards accessibility with assist modes that allow users to avoid certain muscle groups or automate certain aspects of the game. Using ‘knee assist’ means the game can be adapted to be played seated while still enjoying an adventure roleplaying workout.

These are just a couple of settings in a couple of games that showcase the fact that accessibility goes far beyond controllers and physical input. Accessibility considerations include UI navigation, subtitles, difficulty, audio customisation, screen narration – to name only a few. Accessible Games notes that ‘accessibility is not hard if it’s part of the plan from the start’ and can easily be included in any game.

Ensuring accessibility is part of the plan from the very beginning stages of development is key not only in creating accessible hardware and software but in creating narratives where people see themselves fairly represented. The Developers Promoting Accessibility & Diversity (DPAD) Initiative strives to increase diversity in the development cycle so that the community and the games it creates are ever more inclusive.

Including disabled characters in games plays a massive role in making gaming accessible – seeing yourself represented in the games you play is a key part of inclusivity. This is an issue across all forms of media, and one that is a focus of research in literature and gaming alike. Positive representations of characters with disabilities are still rare with examples being few and far between – there remains a lot to be done to make games truly representative of their user base.

Community is a key aspect of gaming and being able to access this is vital for disabled players as it provides an opportunity to connect with their peers and meet on a level playing field. ‘Video games allow individuals with disabilities to experience situations that may be difficult or limited in the real world, provide social networking opportunities to maintain mental and emotional health, and participate in one of the world’s largest pastimes.’

Gaming is a huge part of our culture and being able to engage with this is something that should be accessible to everyone. Charities like AbleGamers and SpecialEffect are finding ways to make existing games more accessible and enabling gamers with disabilities to take part in this fantastic community.

From indie developers to massive names, the gaming industry is stepping up to the plate to make upcoming games more inclusive and accessible. But, to quote the Senior Gaming Accessibility Program Manager for Xbox: ‘one thing we’ve learned on our accessibility journey is that we are nowhere near the end of it.’