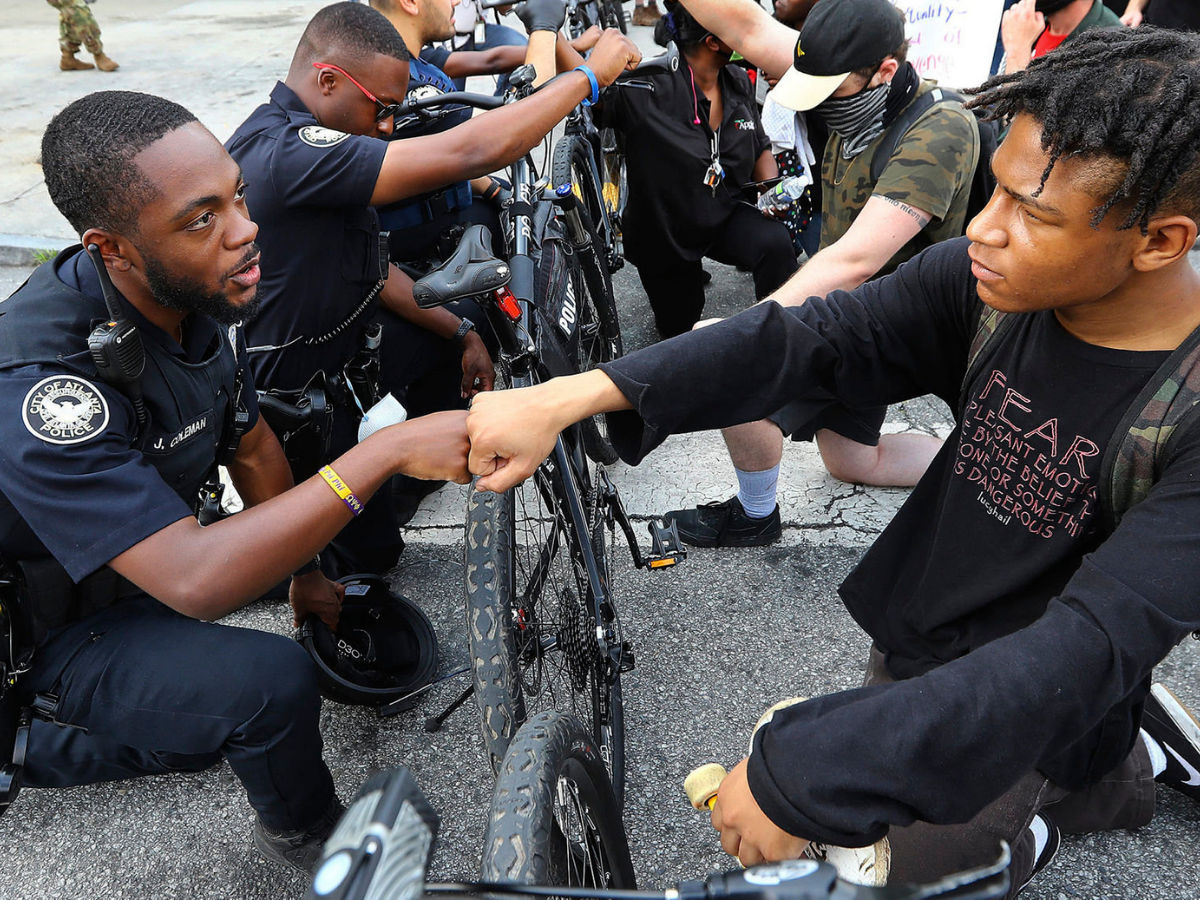 What Has Changed in the Year since George Floyd’s Murder?

George Floyd’s legacy has amplified talk of change, but many inequalities still persist.

It has now been a year since George Floyd was killed by Minneapolis Police Officer Derek Chauvin.

Floyd became a symbol in the fight for racial equality, his name and story being heard across the world, igniting groups across the US and UK alike. But as we mark this year and reflect upon the changes brought, it is also time to note the areas in which change has been slow, or even absent.

A year on, it is still clear that many inequalities still need to be addressed. In many parts of the world, BAME communities are obstructed from accessing core services, including Healthcare, Education and Technology. Though there has been progress in the US and the UK, inequalities persist – the effects of which have been strongly felt during the Covid-19 pandemic. In light of the events of the past year – both in terms of racial justice protests and the pandemic – we are exploring the links between the two.

In some ways, racial equality has come on leaps and bounds over recent decades. In others, it has hardly budged an inch. Protests over the deaths of Black Americans at the hands of police officers are unfortunately nothing new – Eric Garner, Michael Brown, Tamir Rice, Walter Scott, Alton Sterling, Philando Castile, Stephon Clark, Breonna Taylor; all of these names made headline news since 2014, and many more didn’t.

George Floyd’s murder was not an isolated incident, far from it. He became an example that shook the world to its senses about the long lasting issue of police brutality in America. There have been calls for independent prosecutors to be involved in police shooting cases due to the small number of officers that are actually convicted of murder – Derek Chauvin being Minneapolis’ first.

Protests rapidly spread and soon George Floyd’s name was being spoken around the world. The conversation expanded from police brutality to the rights of BAME people as a whole, highlighting the inequalities they face across society. The conversation has grown but change is slow; Daunte Wright was shot and killed in Brooklyn Center, just north of Minneapolis where Floyd was killed, in April of this year.

‘I can’t breathe’
Those words were seared into our collective consciousness and have not left it, and it has been regularly seen on protest placards the world over. Another place the words have been seen is emblazoned across face masks of Black Lives Matter protestors. Intentionally or not, this served as a nod to the greater risk Covid-19 poses to BAME communities. BAME people account for more than 34% of patients critically ill from COVID-19, despite this group making up only 14% of the total UK population.

More specifically, ‘it has been reported that black-Africans make up 5.8% of the cases of COVID deaths while representing only 3.5% of the total population. They have the highest hospital deaths with three times that of the White population.’

This added risk posed to BAME protestors lent even more weight to continued protests during the pandemic.

We have regularly been told that ‘the virus doesn’t discriminate’ and that ‘we’re all in this together’, but this image of the pandemic as a shared experience is missing some vital points. Covid-19 death rates are highest among those from Black and Asian ethnic groups in the UK and in the US; though we may all be in the same waters, we are in very different boats.

Figures simplifying the issue down to one of race discounts other factors such as socioeconomic background and underlying health issues. Some health issues that are more common in BAME communities also have worse covid outcomes. For example, BAME people are far more likely to have Sickle Cell Disease which has high rates of hospitalisation and death from Covid-19:

A study of 178 people with SCD who had Covid-19 found that ‘122 (69%) patients were hospitalized during their COVID-19 illness, 19 (11%) were admitted to the intensive care unit (ICU) and 13 (7%) died.’ These are striking figures given the average age (28.6 years) of those in the study – a previous report of the population at large found the death rate for this age group to be less than 1%.

Existing health inequalities have been exacerbated by the pandemic. The reasons why BAME communities are more at risk from covid are multifaceted, and access to healthcare and health education play definite roles in health inequalities across the UK and US.

In the UK, ‘people from ethnic minority groups are more likely to report being in poorer health and to report poorer experiences of using health services than their white counterparts.’
The picture is by no means a simple one and it is key that the experiences of different ethnic groups are taken into consideration as health outcomes vary across ethnicities.

‘Ethnic minority groups are disproportionately affected by socio-economic deprivation, a key determinant of health status. This is driven by a wider social context in which structural racism can reinforce inequalities among ethnic groups, for example in housing, employment and the criminal justice system, which in turn can have a negative impact on their health. Evidence shows that racism and discrimination can also have a negative impact on the physical and mental health of people from ethnic minority groups.’

Dependent on how we recover from it, ‘this pandemic could be a watershed moment in creating the social and political will to build a society that values everyone’s health now and in the long term.’ It was quickly noted that BAME people had poorer outcomes from Covid-19, but it was not immediately understood why. Further examination has concluded that:

‘Most of the increased risk of infection and death from covid-19 among people from ethnic minorities is explained by factors such as occupation, where people live, their household composition, and pre-existing health conditions,’ according to a government review.

It is therefore systemic inequalities relating to race that have contributed to these poorer outcomes, as opposed to race alone. ‘We didn’t have all this information at the beginning, so it was reasonable to use ethnicity as a proxy early on’ but it is now vital that we ‘address the risk factors rather than just saying it’s ethnicity,’ says Raghib Ali, one of the government’s expert advisers on covid and ethnicity.

Further Repercussions on Health and Education for Future Generations

This past year has the potential to be the catalyst for massive change across our society as we seek to address underlying inequalities and systemic barriers faced by BAME communities.

Addressing issues such as inequitable access to health, education and tech for BAME people is vital in the fight for racial justice and equality. Inextricably linked to this is tackling prejudices and social barriers across our society. For example, generational wealth – or lack thereof – has a massive influence on educational outcomes:

‘Researchers have found that the single-most powerful predictor of racial gaps in educational achievement is the extent to which students attend schools surrounded by other low-income students. […] In about half of [America’s] largest 100 cities, most African American and Latino students attend schools where at least 75 percent of all students qualify as poor or low-income under federal guidelines.’

This then perpetuates existing gaps in society; those with lower educational achievement struggle to land higher-paying jobs – thus continuing the cycle for the next generation.

Education is a key starting point for this change so that the next generations coming up will be armed with the knowledge to continue fighting for racial and social justice. Improving education and understanding of how to care for one’s health and how to access support and care is also vital in improving healthcare outcomes.

Access to education is inextricably linked to access to technology – more so since the pandemic than ever. While rates of digital inclusion have improved over the years it is still an issue with lower-income families less likely to have access to high-speed internet. A recent study ‘found that both poverty and race affect young people’s access to the Internet’. As well as impacting education this also has a direct impact on health: without internet access, seeking healthy living tips or medical advice becomes harder. Bridging the digital divide is therefore an urgent and important task.

Tackling these issues is, obviously, much easier said than done. It is those who are standing up for equality – such as members of the Black Lives Matter movement and those taking part in protests – that are moving the needle towards a more positive future. It is key that names such as George Floyd’s are remembered and remain a part of public consciousness so that this history will not be allowed to repeat.

Since George Floyd’s murder, there has been a heightened awareness of racial justice issues across the US and the UK. Though, sadly, not as much progress has been made on the front of police brutality as was hoped. Awareness of these issues is the first step towards eliminating them, but there is certainly still much work to be done.

For racial justice to truly be achieved, reform needs to extend to the world of healthcare and health education so that people may have equal access to the care they need. Addressing the systemic causes of healthcare inequalities is absolutely vital in the fight for justice.